The Otis Nixon Foundation began 10 years ago when Otis was in a dark period of his life. After a great run and great career, he fell hard into depression and drug addiction. He felt totally alone and desperate before being restored through his relationship with Christ. We received an Honorary Doctor of Divinity in 2009 from the Spring Hills of Life Bible College.

Using his new platform, Otis is giving back and showing others how they, too, can be restored. He has also written a book called Keeping It Real—which discusses his struggles and how he was able to overcome the. 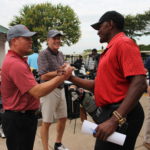 The Otis Nixon Foundation is supported through the efforts of individuals and businesses throughout the community, such as Dave & Buster’s™ of Marietta, Georgia. We host a Christmas fund-raiser for a lot of kids™ and reach out to underprivileged communities through fund-raisers and golf tournaments for the Otis Nixon  Foundation ™. We are also associated with the First Baptist Woodstock Church pastored by Johnny Hunt.  We also thank Hendrick Chevrolet as our tittle sponsor for  2017 and much thanks to southern remodeling of Kennesaw Georgia  for their  over all support.